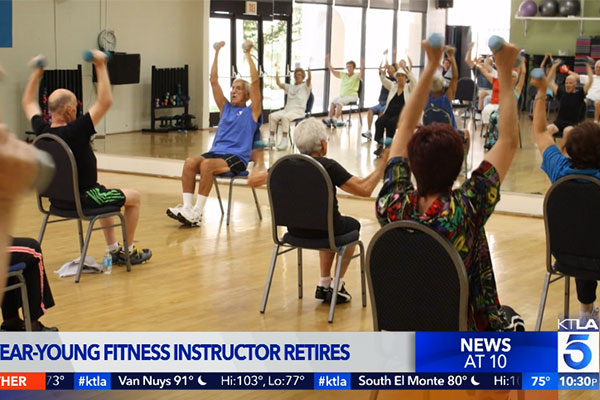 Bob Orozco has taught more than 13,000 exercise classes at the YMCA of Orange County. He even has a room named after him; “The Bob Orozco Group Exercise Room.” After four decades of service at the Laguna Niguel Family YMCA, he is set to retire at the age of 90.

Orozco’s involvement with the Y started well before his move to Orange County. At the age of eight and at the end of the Great Depression, Orozco was given the “Worthy Boy” scholarship from an anonymous donor, opening the doors to his local YMCA in Pennsylvania. From there his love for the Y grew, and as he moved around the states his involvement with the Y continued. Orozco served in the Navy and earned a degree in physical education, always returning to his local area YMCA, and even becoming the Director of Physical Education at the Crown Valley Park Center location. In 1984, Orozco moved to Laguna Niguel to help establish the location, including growing membership and developing physical education programming.

Most recently, Orozco has been leading a 6 a.m. workout class for an aging population. The goal is to keep older adults moving to extend their lifespans and give them a more active lifestyle. From fingers to toes, Orozco just wants to see movement from participants to the best of their ability. It’s more than simple movement, though, as aging adults find social benefits from the classes as well, giving them a sense of community, reducing loneliness, and improving overall health. According to the U.S. Department of Health & Human Services, studies show that adults in this age group who adopt a physically active lifestyle can significantly improve their longevity and independence while reducing major health risks. Even a moderate amount of physical activity, such as walking daily, can result in substantial health benefits, and reduce the risk of falling.

Orozco goes beyond the classroom in serving his YMCA exercise students. While he may have the voice of a drill sergeant in class, he has a heart of gold when caring for his community. He has provided rides to class for those who need help getting to the facility. Orozco always has his eye on the community, and if someone is absent from class he makes sure to check on them to confirm that they are okay. He even helped one class member move her refrigerator.

Talking with Your Children...

Many parents and caregivers find speaking to their children about abuse to be...

A True Comeback Story; the Pandemic at the Newport-Mesa Family YMCA As we hit the...

The pandemic has had a real impact on special needs families and programs. Here’s how...

Hosts of the Inclusive Education Project talk with Associate Executive Director of YMCA...

If you’ve driven on North Harbor Boulevard near Youth Way in Fullerton, you have most...