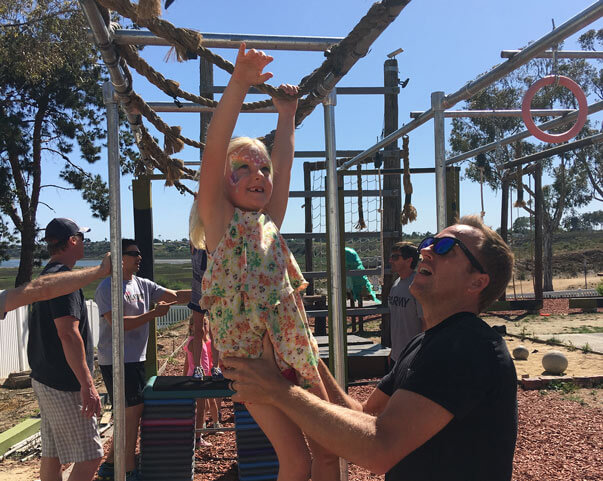 The Father and Son program was developed in a deliberate way to support the father’s vital family role as teacher, counselor and friend to his son. The program was initiated by Harold S. Keltner of the St. Louis YMCA as an integral part of association work. In 1926 he organized the first tribe in Richmond Heights, Mo., with the help of his friend, Joe Friday, an Ojibwa Indian, and William H. Hefelfinger, chief of the first Y-Indian tribe.

Inspired by his experiences with Joe Friday, who was his guide on fishing and hunting trips to Canada, Harold Keltner initiated a program of parent-child experiences that now involves a quarter of a million children and adults annually in the YMCA.

While Keltner was on a hunting trip in Canada one evening, Joe Friday said to his colleague as they sat around a blazing campfire: “The Indian father raises his son. He teaches his son to hunt, track, fish, walk softly and silently in the forest, know the meaning and purpose of life and all he must know, while the white man allows the mother to raise his son.” These comments struck home, and Harold Keltner arranged for Joe Friday to work with him at the St. Louis YMCA.

The Ojibwa Indian spoke before groups of YMCA boys and dads in St. Louis, and Keltner discovered that fathers, as well as boys, had a keen interest in the traditions and ways of the American Indian. At the same time, being greatly influenced by the work of Ernest Thompson Seton, great lover of the outdoors, Harold Keltner conceived the idea of a father and son program based upon the strong qualities of American Indian culture and life–dignity, patience, endurance, spirituality, feeling for the earth and concern for the family. Thus, the Y-Indian Guide Program was born.

The rise of the Family YMCA following World War II, the genuine need for supporting young girls in their personal growth and the demonstrated success of the father-son program, in turn nurtured the development of YMCA parent-daughter groups. The mother-daughter program, now called Y-Maidens, was established in South Bend, Ind., in 1951; three years later father-daughter groups, which are now called Y-Princesses, emerged in the Fresno YMCA of California.

In 1980, the YMCA of the USA recognized the Y-Indian Braves Program for mothers and sons; thus completing the four programs and combinations in Y-Indian Guide Programs.

Although some Y-Indian Guide groups had extended their father-son experiences beyond the first three grades from the beginning, it was not until 1969 that the Y-Trail Blazers plan was recognized by the National Long House Executive Committee for sons 9 to 11 years old and their fathers.

Trail Maidens, Trail Mates and Co-Ed Trail Blazers have also been developed and recognized in YMCAs across the country. Most recently, the Adventure Guide Program has been expanded to include preschoolers and their parents in the Y-Papoose Program.

In the 80 years since Harold Keltner devised the concept of Indian Guides, the program has flourished around the country. As time passed, traditions developed all across the country, with some groups taking the “Indian” theme to the extreme and others emphasizing the “Indian” component only where it seemed to make the most sense. In the late 1980s, Native American lobbyists and individuals pled with the YMCA to drop the “Indian” theme from their program explaining that the program often stereotyped. The YMCA of the USA dropped its support of the “Indian” theme and moved to an adventure theme. Although the name has changed to Adventure Guides, the ideas behind the program and many of the traditions remain the same.

One of One Hundred Fathers

“I have been fortunate to have spent more than 50 years with our program, starting as one of five sons raised in the Indian Guides Program in Downey, California during the 50’s, through the raising of my own four children with the Indian/Adventure Program in the 1970’s/1990’s. Additionally, I have had the opportunity to serve as a Volunteer Staff Member working with the Adventure Program from 1999 through 2009.

While there are many wonderful parts of our program, unfortunately, there are a few bad practices. By far the most damaging aspects that I have witnessed is also one of the most controversial: the use of intense competition between tribes or circles. I always thought that the competition for the best drum, fastest running circle, or best tribe was just something that we did. However, as I witnessed the disappointment on the smaller children’s faces or the sadness in the faces of the newer Circle it struck me that something was wrong with our model, and I had no idea how to fix it. It was not until I was taught a lesson by one of our wisest and kindest fathers, Tom O’Connor.

During the talent show at our Winter Campout, I noticed that when each group walked off stage, they were excited and full of glee. More so than other times, these girls were so thrilled about the song they had just sung in front of the entire nation. I couldn’t figure it out until I went to the back of the stage and got the same view as the performing children. It was then that I noticed that Tom O’Connor and his entire group were cheering and applauding for each group as if they were their girls. It was infectious and the other dads joined in. It was at that very moment that I learned a valuable lesson: we should all behave as if each group was actually our group with our children. Clap and cheer for all our children, not just our own. This powerful lesson was not lost on our leadership. We all decided that from this event on, we would treat all children as our own, offering encouragement and praise to all, not just the swiftest or cleverest.

From this revelation, we devised the program that is the centerpiece of our groups: 1 of 100 Fathers. We believe that each father should act as if all the children were indeed their children. In effect, each child would attend an event and be surrounded by not 1, but 100 supportive and nurturing fathers. We will encourage and cheer for all our children if they win an award or put on a skit that we have seen hundreds of times. We ask all our fathers to go by this “Golden Rule” and coach all of our new dads in this practice, to be 1 of 100 Fathers.”